Read on to see why she writes, why she chooses to be an indie author and what she has planned for readers!

1. Who and/or what inspires you to write?

I don’t wait for inspiration. If I did, I’d probably never get anything done. I make myself sit down, start typing, and the words just come. So I guess I could say getting in the routine of writing is what inspires me.

2. Which of your characters do you like the most?

I like Marnie Becker in Bad Girls, because she’s tough and I like strong female characters. I also like Ricki Fontaine, the main character in my new cozy series, Top Shelf Mysteries. Ricki is the first character I’ve written from the first person POV, and I really enjoyed it.

3. What surprises you most about being an indie author?

That people buy my books! Seriously, I’m thrilled about every sale and every time one of my books is read through Kindle Unlimited. And I’m uber-thrilled when someone leaves a good review. It’s rewarding to know my books have entertained someone.

4. What are the advantages of being an indie author?

I’m a control freak (only about my own life, not anyone else’s), so I like having complete ownership of my books and being in control of what I write and when I write.

5. How did you become an indie author?

After having been retired for eight years, I decided in 2014 that I no longer had an excuse to not give fiction writing a serious try. After finishing Catch A Falling Star, I decided to go the indie route, because at my age, I figured I didn’t have the time to endure the years of rejections that most traditionally published authors go through. I began researching it and discovered Smashwords founder Mark Coker’s free ebooks on how to self-publish. I bought a cover from selfpubbookcovers.com (later changed it), followed Mark’s instructions on formatting, and uploaded my book to Smashwords and Amazon.

6. Tell us about your latest release. 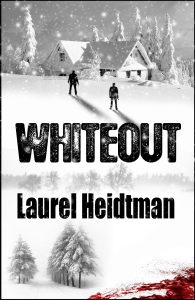 I released Whiteout in March of this year. It’s a thriller set in Daniel Boone National Forest in Kentucky involving two couples with issues stranded in a blizzard in a remote cabin over Easter weekend. Not far away two U.S. Marshals are transporting two violent federal prisoners when they run off the road in the storm. The prisoners escape and find their way to the cabin. And there’s a twist, but of course, I won’t ruin that by talking about it!

7. How many more books do you plan to publish?

As many as I can write. I hope that will be a lot.

8. Who are some of your favorite indie authors?

One of my very favorites is Hugh Howey, although since he’s been so successful, I’m not sure if he’s still publishing independently. I also loved Blake Crouch’s Whispering Pines series. I interview other less famous indie authors on my websites and have read at least one book that I’ve liked by each of them. That list is very long and continues to grow. I’ve temporarily suspended the interviews while doing a special promo for Indie Author Day on my blog, but the interviews will resume in November, and the previous interviews will still be available then.

9. When will you release your next book?

I’m planning on releasing The Body on the Barstool in early November. It’s my first attempt at writing a cozy, and it’s the first book in my planned Top Shelf series. I’ll be releasing it under my Lolli Powell pseudonym.

10. How can readers learn more about you and your books?

I write mysteries/thrillers as Laurel Heidtman, and romances (and soon cozies) as Lolli Powell. I have a website for each name: www.laurelheidtman.com and www.lollipowell.com. I also have a blog at www.ridgewriter.com. All my sites are linked to one another.

About Laurel and Lolli

I’m from southwestern Ohio originally and attended Miami University in Oxford, Ohio, where I received a B.A. in English with a Creative Writing Emphasis, an Associate Degree in Nursing, and a Master of Technical and Scientific Communication (fancy way of saying technical writing!). I never could figure out what I wanted to be when I grew up! I’ve been a dancer, a police officer, a registered nurse and a technical writer–and those were just the jobs I spent ten years or more doing. I’ve had even more short term jobs.

I’m retired from all of those now and only work at writing fiction–which really doesn’t seem like work at all. I live with my husband, four dogs, and two cats on private land inside Daniel Boone National Forest in Kentucky. We have lived through a March blizzard that dumped 22 inches of snow on us, but thankfully, no escaped federal prisoners showed up on our doorstep!

Wow, Laurel! Thank you so much for sharing your answers with us! Join Laurel and I for fun and prizes tomorrow, the first annual Indie Author Day! We’re having a Facebook party where you can talk with us about (probably) anything you want to know about our shared passion for writing as indies.

As always, thank you for reading,

I have a newsletter where I share exclusives and who knows what else. Sign up is easy and takes moments!