Chris, I’m hungry. Will you come over to my blog and share one of your character’s favorite meals?

These sandwiches are heavenly! Homemade bread, garden-fresh tomatoes, and vegan mayo are keys to why this sandwich lights me up!

Chris kindly shared her recipe so I could make them again AND she said I could share it with you!

Here’s What She Said!

Readers of the Revelation Chronicles know that my main characters love Tomato Sandwiches.

This recipe is very simple:

To make it special, I have included a recipe for Vegan Mayonnaise. Enjoy!

You only need 4 ingredients to make this vegan mayonnaise and it’s ready in just 2 minutes!

1. The oil and the plant-based milk should be at the same temperature. It is easier to blend.
2. If you use an immersion blender: combine all the ingredients in bowl. Place the immersion blender in so that it sits firmly on the bottom of the bowl and pulse until the mayonnaise emulsifies. Once most of the vegan mayo has emulsified, you can move the blender up and down to incorporate any oil that is sitting on the top.
3. If you use a regular blender: place all the ingredients in the blender, except the oil, and blend for about 5 seconds. Then add the oil gradually while the blender is going, turning it from low to high until it thickens.
Note: I make this with almond milk rather than soy because of allergies. Almond milk makes a thinner mayonnaise than soy milk. To thicken—simply decrease the amount of liquid by one teaspoon.
If you use Key Lime juice rather than Apple Cider Vinegar, the mayonnaise will be sweeter.

While you enjoy your sandwich, check out this excerpt from Travelers Zone, my newest novel in The Revelation Chronicles series. 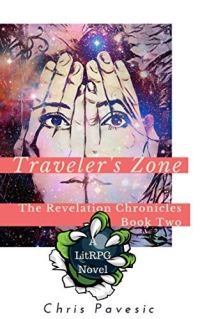 Above the tree line floats an airship close to three hundred feet long with a slightly rounded wooden hull. Ropes attach the lower portion of the ship to an inflated balloon-like aspect, bright white in color with an identification symbol, a red bird with white-tipped feathers extended in flight, inside a round yellow circle in the center of the canvas. The deck is manned with archers and swordsmen. There are two sets of fore and aft catapults.

What I don’t see are cannons or any other type of a gun large enough to account for the sound of the explosion.

The ship pivots in the air, coming around to point directly at what looks like an oncoming flock of five large birds. Or creatures. They are too big and too strange looking to be birds. They drift closer, flapping their wings.

A moment passes before I realize that they are not creatures either. They are some sort of gliders. A person hangs below each set of the feathered wings, which flap and move with mechanical precision in a sky washed out by the morning sun.

The archers nock their arrows and aim at the flock.

The gliders draw in their wings and dive toward the deck, covering the distance in a few heartbeats. Most of the arrows fly uselessly past the attack force and fall like black rain from the sky. The archers aimed and released the volley too late.

The forward catapult releases a torrent of small rocks at the lead glider. It is a scatter-shot approach that proves effective. There are so many missiles that it is impossible to dodge them all.

But at the moment the stones strike, the other four let loose with fireballs. Spheres of crackling flame spring from their hands, glowing faintly at first and then with increasing brightness. The balls of fire shoot from their hands like bullets from a gun and fly toward the ship, exploding. Pieces bounce off the hull and fall to the ground, throwing hissing, burning globs of magic-fueled fire in all directions, setting everything they touch aflame.

Want to learn more about The Revelation Chronicles? Click HERE for updates on this and the other series by Chris. Watch the video on YouTube.

Chris Pavesic is a fantasy author who lives in the Midwestern United States and loves Kona coffee, steampunk, fairy tales, and all types of speculative fiction. Between writing projects, Chris can most often be found reading, gaming, gardening, working on an endless list of DIY household projects, or hanging out with friends.

Learn more about Chris on her website and blog.

Thank you for reading! The time we spend together means infinitely more because we shared it!

2 thoughts on “A Recipe & A Book Excerpt! – Tomato Sandwich With Vegan Mayonnaise by Chris Pavesic Author of The Revelation Chronicles!”

I am blessed with the friendship of a talented artist who painted this for me. Thank you @aqua_artisan . I love it!
You, Me, and @freshfiction #bookclub. Tonight at 7 CST.
A Magic Book Signing – By Guest Author Anne Montgomery
#Gazpacho #Soup #Recipe For Hot #Summer Days From Guest Author Sloane Taylor
It's Time For Summer Romance #bingo
Oatmeal Raisin Bread Recipe – Guest Post By Author Chris Pavesic
Loading Comments...
Comment
×
<span>%d</span> bloggers like this: